Who hasn't been glued to their television this week to watch Team USA battle it out for medals? I have been glued to Twitter to get results from NBC, the US Olympic Team, and any other television personality who will get me my fix. I know that London is 5 hours ahead of us, but I feel better knowing what has happened and then watching it later. 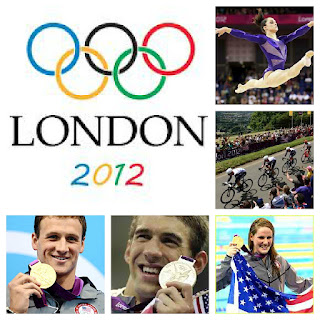 Four years ago in Beijing I was fascinated with the whole Michael Phelps story, and have been engrossed this year as he set out to make history as the most decorated Olympian with 19 metals.

Then to top it off you have other swimmers such as Missy Franklin and Ryan Lochte who are rockin' in the pool.

Of course as a little girl I remember watching the 1996 USA team that won gold. I took 2 classes of gymnastics at Town and Village Dance Studio when I was a little girl, and of course I thought I could be in the Olympics. How about no!? A girl can dream right? I felt so bad for Jordyn Weiber the other night when her All Around dreams were crushed, so I was so happy last night when they won team gold. They rocked, didn't they?

The other morning as I was getting ready in Louisville, I turned out the men's road race in cycling. And man I was hooked. They rode for 6 hours up and down Box Hill. The cyclists are suppose to keep hydrated and energized every 10 minutes. Aids on the side of the road were handing them cross body lightweight sacks for them to take on board with them that was filled with energy bars for refuel. Not that I will ever be a cycler, but I found it pretty fascinating.

By far my favorite part of the Olympics was that special few moments in the Opening Ceremonies that the Queen and her royal Corgis were on the screen. Because 1) I think the Queen is fabulous 2) I love me some Corgis! 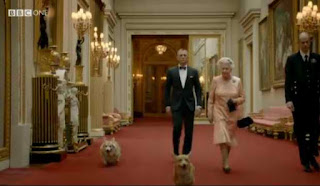 I am excited for the Olympics to continue on for the next few weeks. Anthony Davis, former UK basketball player and #1 pick in the NBA draft is on Team USA, so I am keeping a close watch on them as they continue their domination. Plus one of the best runners on Team USA, Gay, is a Lexington native!

How exciting are these times? They make you have a wonderful sense of pride for your country. It brings everyone together!