'Twas the Night Before...

Merry Christmas Eve!
Drew and I are watching for Santa to make his stop at Nationwide Children's Hospital from our large window on the 4th floor. Though Santa will come tonight to bring toys to children, for us Santa came last Friday in the form of Dr. Mark Galantowicz. He doesn't wear a red suit, but instead he wears a white coat. 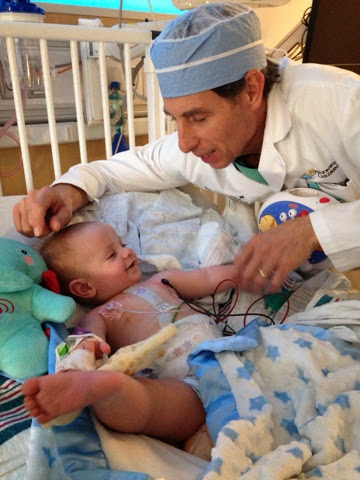 Dr. G has been Knox's surgeon from the beginning, and there is no one I would rather operating on my child. He is a world renown pediatric heart surgeon and transplant surgeon. He is a tall, kind, and gentle man who has a way of putting you at ease. I, of course have been a nervous wreck and a straight up hot mess leaving my child at the operating door. But every time Dr. G comes to talk to us before a surgery somehow my worry about the actual surgery is calmed. He knows what he is doing and he has the upmost confidence in your child. He is so humble and genuine. We really can't say enough good things about him other than we are so thankful God chose him to led us through this. There is no way we can ever thank him enough.  He truly gave us the most wonderful gift we will ever receive - a fixed heart.
Of course we are still here recovering. It is  wonderful to know we are here together and Knox is doing well, but it's still hard to be away from our home for Christmas. To not be doing the normal Christmas things. BUT we have our tree and stockings up in our room, and we read Twas the Night Before Christmas. Though our Christmas Eve meal came from the hospital cafeteria we still shared it with mom, dad, Knox, Drew, and our family of nurses.
A few photos from our night... Merry Christmas everyone! 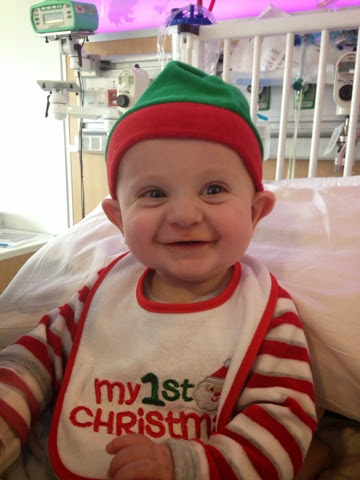 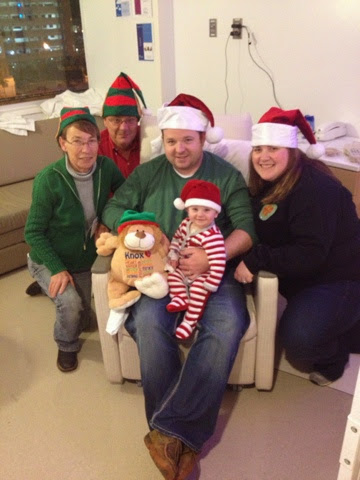 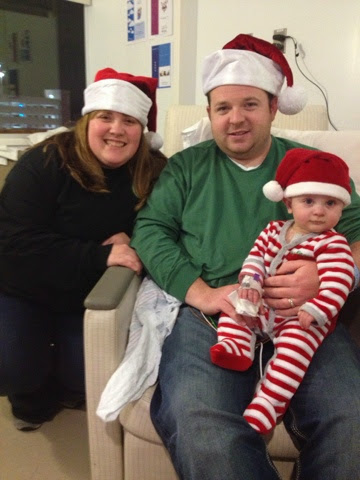 If you followed our journey at our first visit to Nationwide Children's Hospital you may have heard something about a squirrel.
The fourth floor's mascot is the squirrel. He is a large statue that separates the CTICU  from the step down unit. To move  "across the squirrel" means to move to the step down unit.
They have been trying to send us across the squirrel since Saturday. Knox did awesome post op the night after surgery, but his recovery to move has been a little slower 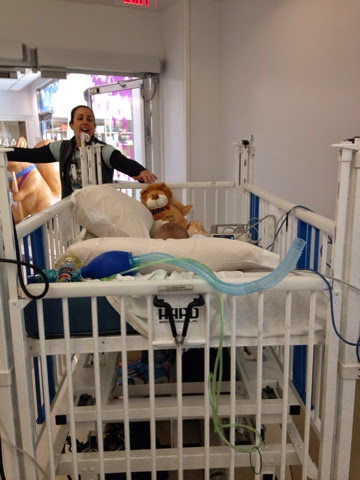 But today they let us loose. Though we are still taking some medications and are still working through some issues he is doing well enough to move. We have been in the surgical bay in the CTICU so we are happy to have a private room.
Knox is starting to return to his old self and has been flashing some smiles today.
We don't know when we will be able to go home yet, but it's always nice to know when you are one step closer.
Posted by Holli at 10:09 AM 1 comment: 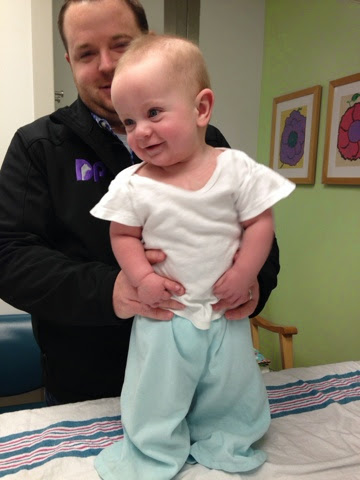 Morning of surgery
As most of you know on Friday Knox had his second open heart surgery. It was the longest 7 hours of my life. It was hard to sit there and wait. They didn't end up having to replace any valves at this time. They just repaired. The surgeon said it couldn't have gone more perfectly.
We met Knox up in our old stomping grounds, the CTICU. Knox did great the first night, and they were already taking about moving us across the squirrel.
BUT in true Knox Hatmaker style it just couldn't be that easy. We have had a few hiccups the last two days that have landed us to still be residing in the CTICU. NONE of them have to do with his heart. The heart looks great. (Insert insanely happy smile).  I don't mind being over here though because we are surrounded by old and new friends that are taking great care of our little peanut. Everything going on is pretty normal post op things around a surgery of this magnitude. His body just needs a little more time to recover. With the wonderful news we received from his surgeon, I don't care if he makes me sit here for 20 days.
He is slowly becoming his old self. We even got a smile out of him this morning. Thank you again for all your texts, prayers, Facebook photos, and ridiculously amazing Knox Tshirt photos.
We love you all From the bay in H4b!
Posted by Holli at 1:06 PM No comments:

Well.... it certainly has been awhile. As I look back the last time I blogged was in July. Ouch. 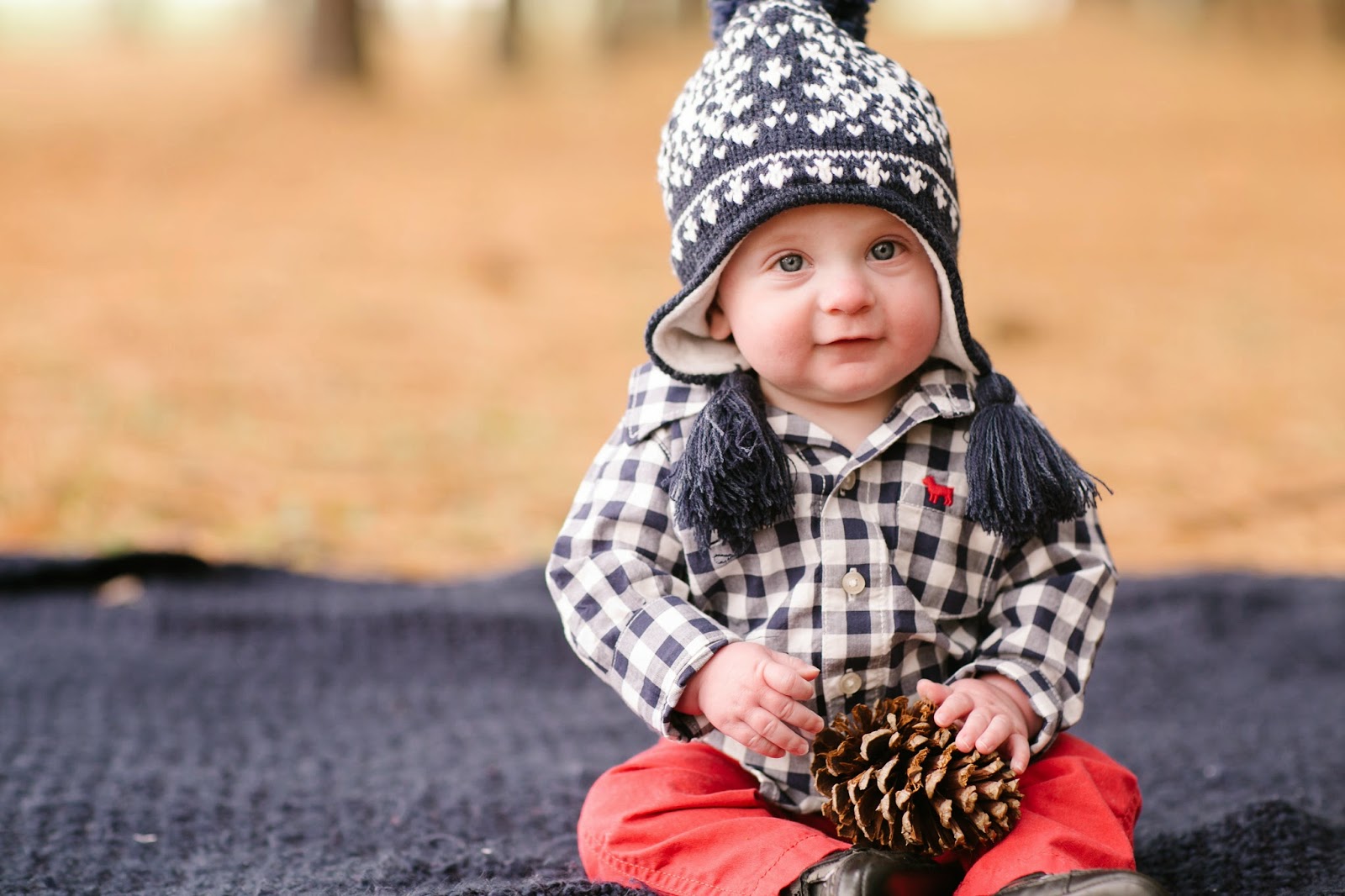 Now its December. And Knox is 9 months old. When did that happen? He is such a little man and we love him so. He wants to touch everything and then put it in his mouth! Sometimes its hard to remember how our adventure with Knox began, but its always there. Looming in the back of your mind. When its time to head back to Columbus for phase two of Knox's congenital heart defect journey.

We knew it was coming. Every three weeks we would go to our cardiology appointment just kind of waiting for the word. We are still sitting pretty good because his numbers are still good, thus its not an emergency. Its just necessary.

So, next Wednesday we will load our family up for Columbus. This is the first time Knox will actually ride to Columbus out of womb. We will have all of our pre-op tests on Thursday, and then on Friday, December 19th Knox will have his second open heart surgery. They say if all goes well recovery usually is 5 to 7 days; which means we are likely spending our second holiday at Nationwide Children's Hospital.  I told Knox, like the Easter bunny, I'm sure Santa can find him.

This time will be hard and it will be different for Drew and I. Not that it wasn't hard the first time because it definitely was, but its different. When Knox was born he was a little baby who we didn't know. We hadn't cuddled. When hadn't spent late nights and early mornings together. We hadn't travelled to 14 states together, met Santa, and attended numerous cattle sales. This time it is our little man; who is wiggly and active. Please say a prayer for our strength through all of this.

But here is where I ask for a favor. Many of you wonderful people bought Knox shirts this summer. I ask that on Friday, December 19th you wear your Knox shirt for strength and support of our little guy.   Take a photo and tag it to Drew or I on Facebook so that we can make an album for Knox to see in the future of all the wonderful support he received. Of course, we also hope that you will keep Knox and his doctors, nurses, and team in your prayers. 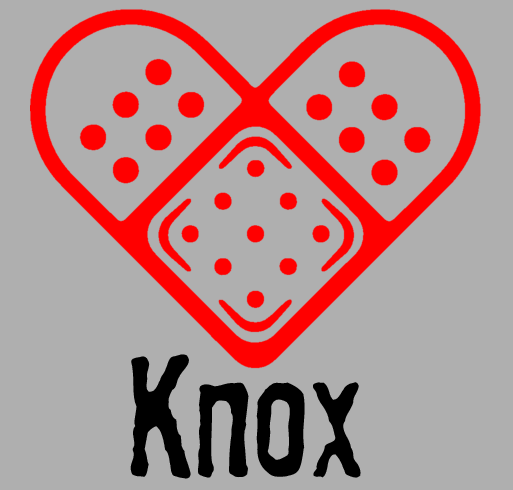 If you don't have a shirt and would like one, there are still some available. Contact me to get one.

I will go back to updating this blog during our stay at Nationwide as I can.