There are a lot of great stories from the Olympics. Stories of success, defeat, hard work, and perseverance. The Olympics inspire us. You hear a lot of stories about the athletes who claim medals, but we don't always hear about the people that place below the medals.

The other night I was getting my daily dose of the Olympics when a story came on was truly inspiring. A man by the name of Hamadou Djibo Issaka from Niger was competing in the rowing sculls. He had only taken up the sport 4 months prior to the game, and had only tried out rowing a week before. Niger is in the desert. There is no place to row. Well, I guess you could, but you just wouldn't get anyway. 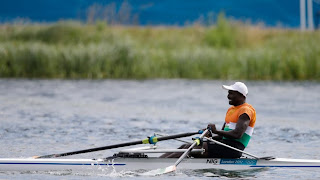 He started the race behind, and he stayed that way the entire time. Though the rest of the pack was way ahead of him, he kept going. And the crowd got behind him. They cheered and clapped until he made it to the finish line. A whole minute after the top end.

Check out the race here

He never quite. Whether it was pride for his country or himself, it was amazing story to never give up - no matter what.