The Hatmaker housebold (cool, huh?) has been anticipating the arrival of Christmas. Is it just us, or does it seem like the Christmas season came WAY early this year? Halloween was over and it was Hello, Christmas! We decided that we would not do any decorating until after Thanksgiving.

Last year, Drew and I decided to do something each year to get us into the Christmas spirit. Last year it was Christmas lights at Dollywood and going to see the Radio City Rockettes. This year, we decided to take in the Trans-Siberian Orchestra in Lexington. Drew loves Christmas music and had been telling me about their cool Christmas music. I wasn't sure what we were in for, but I did ask if there would be singing. To which Drew told me no...lights and music.

Our seats were in the Upper Level and some people (uh-hum in the wrong seats) were taking up way to much room on our row. After stuffing ourselves into a very small section we were ready for the Christmas spirit. 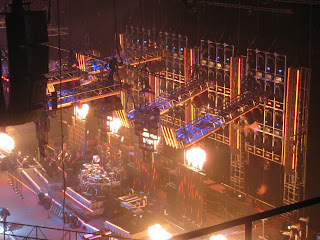 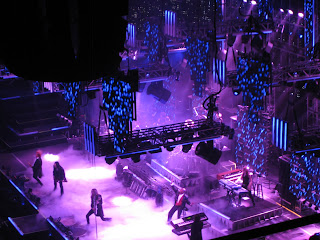 The Christmas music; which included lots of singing, circled around a story that started in a bar then talked about a dad and a girl, then back to the bar, and something with an angel. It was confusing, but the story teller was AMAZING. Great voice plus during the music he danced. Hehehe

Trans-Siberian had been playing for about an hour, we thought. They started announcing the singers and talking about the second half of the show. Whoa...we looked at each other. Second half? Yes, minutes later they came back to play another hour of rock music. Christmas was over. Sorry to the old ladies in their Santa hats. I leaned over to Drew and asked him what he thought all these people who came just for a Christmas show were thinking. He responded probably the same thing we were. 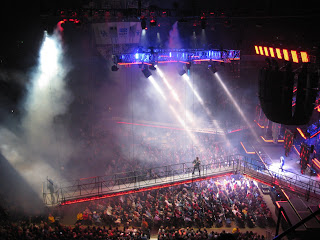 Back to the hair... the long, free flowing hair was to whip it. Everywhere. They ran...to the left...to the right... up... down....into the crowd...up the stairs. All the while, whipping their hair just like they were in Willa Smith's video. Even the singers, who became dancers in the second half, whipped their hair. We went from Christmas to sexy Valentine's day in a matter of minutes. The show ended up lasting about... 2 1/2 hours.

Needless to say... this was a very interesting experience. While the music was pretty cool, it wasn't the Christmas show we had been hoping for. It was highly entertaining though. Afterwards we went to Wal-Mart listened to Christmas music and bought more decorations. That put us in the spirit. :)

Looking forward to the holidays!
Posted by Holli at 8:51 PM 2 comments: