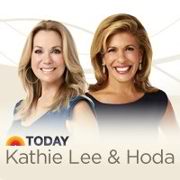 If you are a Kathie Lee and Hoda watcher as I am, you have probably seen the segments where they send Sara Haines out into New York City to do different jobs. She has made pickles, been a ball girl, etc.  Sara, however, is originally from Iowa where she spent her summers de-tassling corn.

I, personally, have never de-tasseled corn, but one of our clients in Nebraska runs a de-tassling business. In the summer, he employees literally thousands of young people to de-tassel corn. They bus them in on school buses, and have to have so many porta-pots in a certain distance within where the kids are working.

So, the other day when they shared Sara's story about de-tassling corn in Iowa, I was excited. One because I know someone who runs this type of business, and two they were featuring an Agriculture story on Kathie Lee and Hoda.

Take a moment and click on the link below for a little Agricultural lesson on de-tassling. I feel that since it is Kathie Lee and Hoda that you should probably watch the video with a glass of wine.