A little elf in our house! 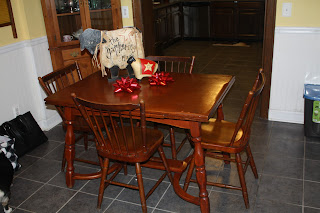 Last year when we came home from the Season Finale sale we found this....

Someone had broke into our house (using a key) and stolen (replaced) our table with this antique tavern table. My heart was pounding because I thought someone actually did break into our house, but who takes something and leaves something?

Of course, the criminal was no other than one of my best friends Lauren who had her mom and dad meet up with my mom to get into our house and give us this Christmas present.

So this year we head off to the Season Finale sale, but Lauren didn't come. She was too busy rescuing cats. We arrived home that evening looked in the door, and sadly there was no new table. I told Drew, "Doesn't look like anyone brought us a new table this year." I proceed in the house around the table to set the mail down, and out of the corner of my eye I catch a glimpse of something. 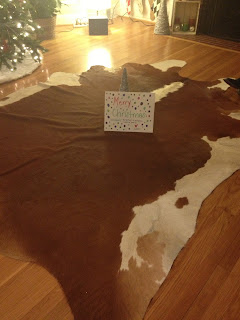 This year the criminal (and her mom) used their own key, and left us a beautiful, large cow hide rug in our front room. Our front room was really empty and this rug really does the trick. The dogs weren't really sure what to think about it at first, but now they love it because it provides an area for them to run and play.

Anyone else ever have a personal elf bring you gifts? I think we will keep her!

Thanks Lauren!!
Posted by Holli at 9:58 AM No comments:

Instead of exchanging gifts this year, Drew and I decided to take a trip instead of worrying over what to buy each other. Throughout the year we usually buy whatever we want, and do a lot for birthdays, so we thought this would be a great idea. Where to go?

We decided to hit the strip and travel to Las Vegas; which neither one of us had ever been to. In December, Las Vegas plays host to the National Finals Rodeo. Both of us had wanted to visit during the rodeo. We lucked out on getting some great seats through a friend of a friend (Thanks Charlotte!). We arrived into Las Vegas on Sunday night, changed clothes, had a bite to eat, and headed to the rodeo!


The excitement of the crowd at the rodeo was infectious! It was like the Kentucky Wildcats playing! Everyone was cheering and very into it. Plus it was packed! Marty, who we got our tickets from told us that it started at 6:45 and was over at 9. His advice, "Do not be late." Boy, was he right! We were maybe 10 minutes late, and the people in our row did not want to move to let us in. So if you ever go - do not be late.

We actually had someone to root for. Cody Wright (pictured below) rides with the Hudson Pines and Hayes Ranch as sponsors in the Bronc Riding. He has won the world champion before, and his two younger brothers also ride.  The Wright boys have all been at the Living Legacy Sale, and we have had the chance to meet. We were there for Round 4 which Jesse Wright won and Cody was second. Jesse ended up winning the World Championship!

We are already planning on taking in the 2013 National Finals Rodeo. It was a great time with amazing shopping as well. Country Christmas is actually like 4 venues! If you get the chance to go, take it!

Of course I had to take a photo of what I wore to the National Finals Rodeo in Las Vegas for all my blog buddies to see. Enjoy!

But guess what? Fall sale season has now been completed which means I have more time to devote to blogging!

Let's start with this sale day fashion from The Chosen Few at Janssen Farms. I'll be honest. It was pretty chilly and I might have worn my jacket most of the time. But of course, I did put an outfit together for that day, no matter how much it actually got seen.

For our final sale of the fall, I revisited one of my favorite outfits since I began the Sale Day Fashion segment of my blog. Check out what I wore at the New Direction Sale that I copied and used again for the Season Finale sale last weekend.

Hope everyone has enjoyed the Sale Day Fashion segment of my blog. We are done with sales for a little bit now, but I hope you will join me when we start up again in January/February!
Posted by Holli at 9:51 PM No comments: