Pearls for any age...

In my March Showers brings Happy Weddings post, I told you about a lady named Cubbie that attended my shower at Drew's mom's house. I have been patiently awaiting a picture of us together so that I could share her with the world.

Cubbie is Drew's stepfather's aunt (get that?). I first became obessed with Cubbie at a funeral I went to with Drew in Decatur. She was tall, elegant, and she was wearing pearls. It was destiny already. I watched her every move as she mingled with others.

From that moment on I wanted to know more about her and be friends with her. She loved pearls, as did I. We were soulmates. Emily, Drew's sister came up with the amazing idea to invite her to our shower. And that afternoon here she came down the driveway. I almost wet myself with excitement.

Now she was a hoot at the shower telling stories on her husband and how in love they still are after so many years. Unfortuntately, she did not wear pearls to the shower, but thats ok. In the midst of her story telling and a gift adorned with pearls, I couldn't help myself.

"I just think you are fabulous!" I said in front of all the attendees.

She was flabergasted with my statement. I told her that she wears pearls and I love pearls, and how great I just thought she was. Cubbie was beaming.

So here is Cubbie, myself, and Drew right before she left to go home. 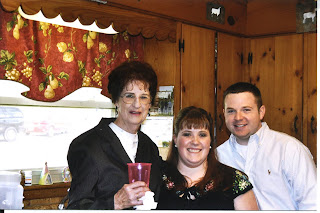 I later found out she told Drew's Nana how touched she was that I said those things about her and she didn't really know me. We're bff's now though.
Posted by Holli at 6:44 PM