Most of you know that I am marrying a sheep man, prodominatly, but he does show and raise Simmentals as well. So..all is right in the world. When Drew and I got serious he told me that he wanted me to have a sheep and breed that I loved, and wanted to come to the barn everyday to see. So off I set to choosing the right breed.

I'll have you know that I have only ever had anything to do with sheep twice in my life. As a little girl, I showed in the Wool and Woolies at the Tennessee Valley Fair and a market lamb I purchased for $100 my senior year of high school.

But.. because I loved my boyfriend I wanted to jump right into the sheep business to prove I was committed. :) Therefore, off I sat to choose the perfect breed for me. Drew already had Hampshires and Natural Colored, both which I had ruled off because they had already tried to kill me. So about a year ago, Drew had some sheep consigned at a sale in Wooster, Ohio, and there they were. Border Leicesters! Small, cute, and wooly! Drew purchased a Border Leicester for a friend of his, but I immediately fell in love with her. I wanted to keep her. After a little negoiating I was the proud mother of a February Border Leicester Ewe Lamb named BETTY! 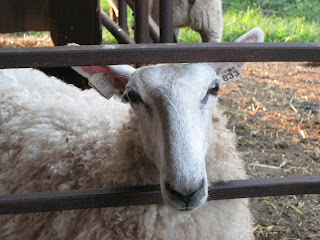 Now most sheep are loud and run around a lot, but Betty is far from that. She has loads of personality, loves to eat, and she RULES the pen. I can come outside and yell her name and she will talk back to me. Betty does chores, feeds the other sheep, and takes baths. Though her wool grows pretty fast, and with it getting hot Drew insisted that she needed to be sheared. BOO! I love Betty's wool because she is small and she looks like a little ball of yarn, but my shepherd (Drew) won and it was haircut time. 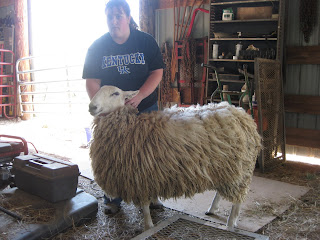 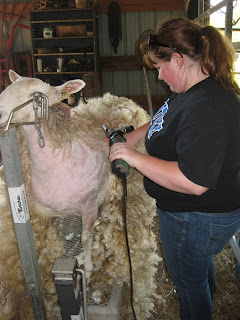 Yes, I was actually shearing her. 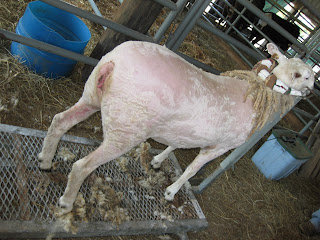 Afterwards, I called her Ugly Betty. I hope it grows back fast.

Betty "The Bada**" Border Leicester (her full name) is now naked. She says its nice to take her top off. :)
Posted by Holli at 7:37 PM