The Power of Giving

The always say...its better to give than receive

When I was younger, I remember sitting at the awards banquet at the AJSA Junior National Classic in Columbus, Ohio. The year was 1997 and Cheyanne Allen was speaking as she gave up her Presidency of the AJSA Board of Trustees. As a little girl, I was in awe of her. I had just completed my first Junior National Classic, and I longed to one day be like her.

Fast forward a number of years. I have grown up (obviously), became more active in showing and the AJSA. This led me to meet a man named Peter Courtney. He was a man who even at an older age had such a great lease on life. As a Simmental breeder in Wisconsin and a savy business man, Peter found it very important to give to the younger generation. One of the ways he did this was being active in founding and supporting the American Simmental Foundation. A cause that both him and Cheyanne shared near and dear.

You see in that year of 1997 Cheyanne donated the first ever Foundation Heifer at the National Western Stock Show. I found this picture just recently in my dad's old archives of photos. This was the female she donated, along with Jerry Lipsey, Executive Vice President of the ASA and Val and Lori Eberspacher, sale managers of "The One" Sale in Denver. 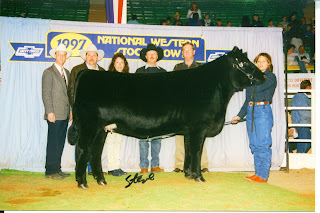 That next year in 1998, Peter Courtney of Triple C Farms donated the second female to be auctioned off to benefit the Foundation. And if you look down the line of buyers, his farm comes up fairly regular on the list.

Peter and I became great friends over the years. My fall break trip was always to accompany my dad to the Triple C Farms sale each fall. I even won a scholarship from one of the heifers I purchased and showed from Triple C Farms. Though Peter was several years my elder, he was excited, active, and thrived on the young people around him. We shared a love for the Simmental breed and an active interest in the AJSA. 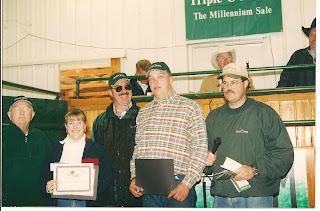 Sadly, over the years Peter's health began to fail. In 2009, he was honored by the American Simmental Association as an honoree of the Golden Book Award. Peter came to Ft. Worth, Texas to accept the award. As we sat in the hotel bar area visiting with Peter he expressed his concern for the Foundation Heifer to continue after he was gone. He asked my dad to help make sure the next few years was lined up, on one condition. He wanted my name to be on the list of donors in the coming years. Needless, to say I was honored that Peter Courtney, who I had admired as a mentor for many years asked me to be apart of a cause we both found important. Of course, I was in.

I wish I could say that Peter was there to see HTP Simmentals donate to the ASA Foundation this January of 2012, but sadly he wasn't. I thought a lot of Peter that day. His impact on the ASA and AJSA. His impact on me.

Our donation was the right to flush DMN Daisy Mae. Our lead donor who claimed honors at the American Royal and Simmental Breeders Sweepstakes. The flush was purchased by near friends at Sanders Ranch, Pine Ridge Simmentals, and Hudson Pines Farm for $10,000. I know that Peter was smiling down on us that day. 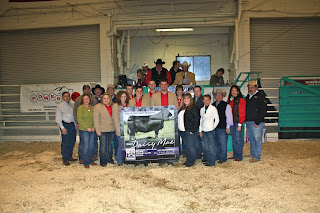 This might be my most public thank you for this extremely important moment in my life. Thanks to Drew for believing in me, telling me someone would buy the lot, and comforting me in my melt down the day of. To mom, dad, Kathy, and Anthony for being there to support us. To Ronnie and Bryan for supporting the utilization of Daisy Mae. To The Register and EDJE Technologies for your little ways of support. To Cheyanne Allen for being such a inspiration to me and a great example. And of course, Steve & Margaret, Larry & Dawn, and Miranda, Robert, and the staff of HPF for their purchase. Last but not least, Peter for believing in the future and a young lady like me.

Aside from Cheyanne, who began the Foundation Heifer, Drew and I are the youngest to donate. I couldn't be more humbled and proud to be on a list with some great Simmental breeders.

For more information on the ASA Foundation visit www.simmental.org
Posted by Holli at 8:12 PM