Food Network has nothing on us.

Due to our line of business and traveling frequently, we eat out A LOT. Sometimes its to the same ole places that are everywhere, but we (Drew and I) always try to make sure that we take in some place that is local or not a large chain. Gives you some variety, keeps it interesting, and is very good for our travel journal. 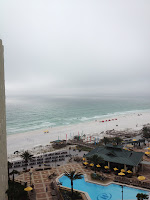 This week we are in Destin, Florida one of Drew's work conferences. The hotel sits directly on the beach and our room faces the ocean. As I type this I am sitting on the balcony watching the waves. Rough, huh?

We arrived Tuesday afternoon and after some ocean watching and chill time, we decided it was time to get some dinner. I had researched the hotel before we came and knew that they had a very nice steak and seafood restaurant in the hotel called Seagar's. There are only two of these restaurants in the United States; the other is in Alexandria, Virginia. I suggested we take it in it, and after making a reservation for later in the evening, we headed downstairs. 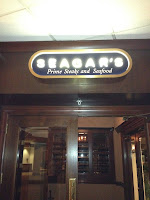 We were seated at our booth overlooking the restaurant with its dim lighting and baby grand piano. Our waiter Paul came and took our drink order then alerted us that the Captain would be over shortly to tell us about the menu. The captain comes shortly thereafter and thoroughly explains our options. They serve prime cuts of beef and all of their seafood is either local or flown in daily. Yes, you have my attention.

After a few minutes looking over the menu we decide to start our evening with the Creole Barbeque Shrimp. Delicious! Three shrimp served in a house made BBQ sauce with corn fritters. You could tell that the big, plump shrimp were fresh. I was worried it might be spicy, but it was not at all.

Onto the entrees. I chose to go with a Filet and Crab Cake duo and Drew chose the Jumbo Lump Crab Louisiana. We try to never order the same thing so that you can share with each other. I did share a bit of my steak with him, but just a bite because it was so good! We also ordered a side of Creamed Spinach (one of Drew's favorites), but we brought most of it back to the room because we were too engrossed with our entrees. 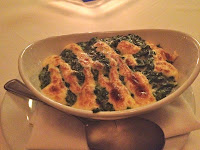 My steak was phenomenal. I have ate steak at many different places such as Ruth Chris and Morton's, but this steak takes the cake. It was flavorful, juicy, and succulent. It was 10 ounces, much larger than I usually order, so I brought some back for lunch. It was just as good the next day. My crab cake was full of jumbo lump crab meat. Combining the two into one bite was awesome! 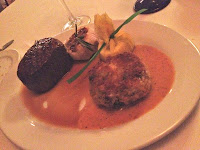 I wish I had of video tapped Drew explaining how wonderful his meal was last night. It would easily rival any of of the Food Network's chefs describing food. His crab meat was served on top of saffron scented rice. I know that saffron is fancy, expensive, and in the movie No Reservations. It was served with baby bok choy, grilled onions, and mango. I tried it and it was delicious. Wouldn't trade it for my steak, but he loved it so thats all that matters. 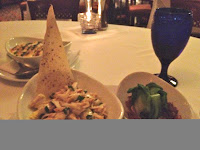 Then comes the time when you are so incredibly full, but its time for desert. Paul told us about the many options including Peaches Foster and Chocolate Souffle. We settled on the New York Style Cheesecake brought in from the Carnegie Deli in NYC in a to go box. It was delicious on Wednesday when we finally ate it. So good, we got carryout cheesecake Wednesday night.

Oh, I almost forgot about the fabulous fresh breads! Paul told us he was going to bring us some bread. He brings a huge bread basket to the table where we could choose what we wanted. We took one of each. Hey, you have to try them all out! Our selection included french, multi-grain, onion loaf, and raisin bread. Those we served with a homemade Italian salted butter, which you could have eat by itself.