I ate at Pappy's!

Drew and I aren't super foodies, but we try to get in our fair share of Food Network recommended restaurants from some of their famous shows. I have an app on my phone for TV Food Maps where you can type in where you are and it will bring up restaurants that were on Food Network and the Travel Channel.

So, on our way to St. Louis for Drew's work conference I decided to look up what fine eateries are in STL. One of the restaurants sparked my memory because I remember seeing it on the tv. Drew and I utilized the free night his conference gave to check out Pappy's Smokehouse which is voted one of the Travel Channel's top 100 places to eat in the United States! Of course, Pappy's is a BBQ joint that specializes in what else, but RIBS! 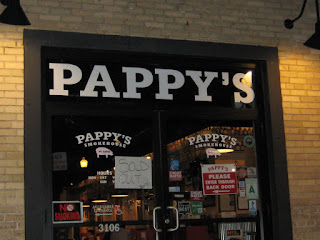 Pappy's is a small restauarant with BBQ sauce bottles lining the top of their ceiling. Hundreds of bottles accompany the picnic large picnic tables with red and white table cloths. You stand in line to order your food before taking your seat. When you round the corner to place your order, you see all of the articles, awards, and celebrity photos. I saw Pappy's Smokehouse on the Food Network's Food Feuds hosted by Michael Simon. Though Adam from Man Vs. Food has an item on the menu named after him. Unfortuntately, it was like 42.00 and there were out of hot links. 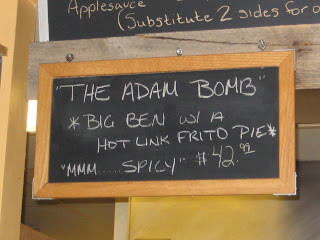 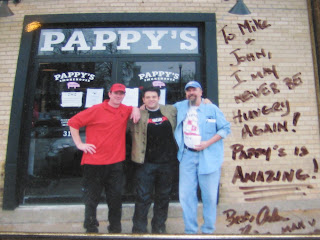 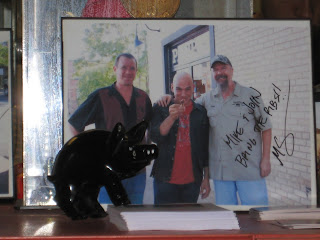 Therefore, Drew and I both decided on ordering a half slab of ribs which came with 2 sides. Drew ordered baked beans and cole slaw, typical bbq sides. I settled on the FRIED corn on the cob and slaw. The corn had a light batter on the kernels. It was interesting. Tasted good, but interesting texture. But most importantly, the ribs were delicious! They had a dry rub with the options for sauce on the table. No sauce for me though. The ribs had so much meat on them! All in all, it was a very belly-filling adventure. Definitely one for the travel journal. 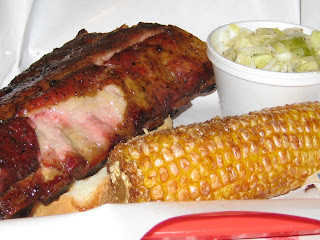 Sorry, I had to try before I took the picture!

We left with full bellies and t-shirts from Pappy's!
Posted by Holli at 8:10 PM