Corgis at the capital!


A few weeks ago after our sale in Gettysburg, Pennsylvania we decided to head to Washington D.C. on our way home. Drew had never been to our nation's capital, and I love the history and monuments. The only kink in our trip was that we had the dogs. Which meant no museums, but you can take them to the National Mall.


First off, let me say that our corgis don't walk on a leash that much. The first 30 minutes of walking was a nightmare. The pulling, choking, and down right craziness was almost enough to make you want to get back in the car.

They started to get the hang of it after a bit. They also enjoyed the massive amount of attention they got. I mean other people had their dogs, but oh my- corgis are popular! 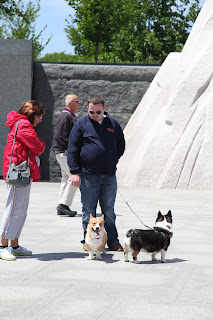 Since we had the dogs and I had been to D.C. before I let Drew go check out the monuments while I stayed back with the dogs. Drew said he could always tell where I was. You just looked for the large group of people and that's where I was. 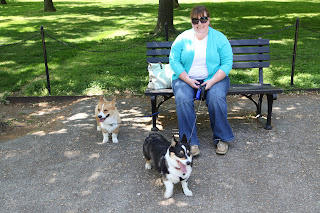 Tuck loved all the attention! He would jump and bark. I told him we had to be quiet because we had to be respectful. We also had to make sure Tuck didn't pee on any monuments. 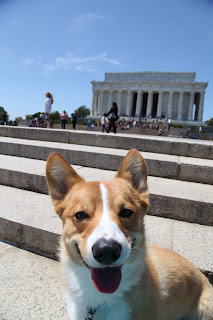 They also wanted to jump in the reflecting pool because of the ducks. Now wouldn't that have been embarrassing? 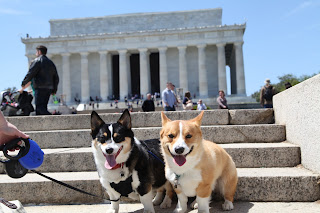 The best story of the day happened at the Lincoln Memorial. Drew went up into the monument while Gabby, Tuck, and I sat on the steps. This really nice, young couple come up to me.

"I know this will sound really crazy, but our friend is obsessed with corgis. Can we take a picture with your dogs?"   Of course!

After one last stop at the Martin Luther King Jr memorial the dogs were pooped out! We headed back to the car for a drink of water and headed home!
Posted by Holli at 8:22 AM