This week's sale day fashion isn't like all the others. I wasn't trying to put together some super cute outfit with great accessories. The greatest accessory I could wear with this outfit was a heart full of love and support. 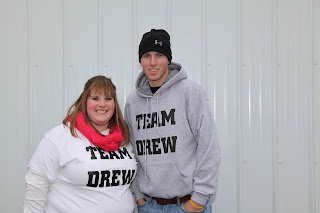 Back in September, we learned of a young man's battle with cancer. He learned of it on his 18th birthday. BUT, he wasn't just one random person with no attachment, he was someone we knew. A young Simmental breeder and junior exhibitor who was diagnosed with a rare type of cancer. One of the great things about the livestock community is their ability to rally and support. In no time there was a facebook group "Team Drew- Stick it to Cancer," and t-shirts in production.


This is my dear friend Jackie, sporting her Team Drew t-shirt. Jackie, herself, is a breast cancer survivor! 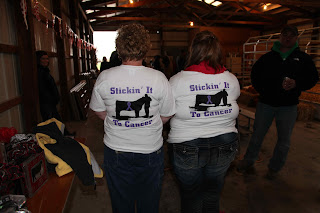 Over the past few months there has been silent auctions to support Drew and his family. Along with  customized glass blocks made by Julie Kemme. And thats just things I know about. I know there are lots of other great things going on in support.

Drew and his family consign to the Land of Lincoln Sale. With Drew's diagnosis they were only able to put one lot in the sale. But that didn't stop members of the sale group and breeders from Illinois in supporting their family We sold a CJ Brown print once for $3,000 and a second time for $1,800.  I received a Facebook message from the Lemenager Cattle Co. who wanted to donate embryos in support of Drew. They brought $1,000 a piece and were purchased by Bramlet Simmentals and Ryan Cattle Co.

So as you can see, this past weekend was much more about supporting others!