I Picked the Pickers 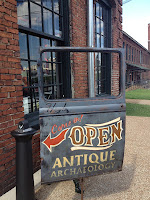 If you checked out my High Five for Friday blog yesterday, you might have seen that I made a little visit to the American Pickers' store Antique Archaeology in Nashville. From being dedicated DVR'ed watchers of their show, I knew they had a store in Nashville. So me and my GPS took off to find it. 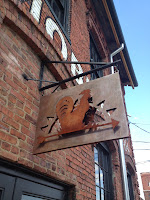 It is in the downtown area, but other than that I couldn't tell you much else. I really felt like my GPS might have been steering me in the wrong direction, but when I finally turned on the correct street - I knew I was in the right place. Cars lined the streets. The block is an old warehouse that has been divided up into a few stores. Let's just say it isn't super big. But boy did they have a lot of stuff crammed in a small place. There were bikes, lights, and other antiques hanging from the ceiling. 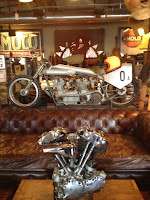 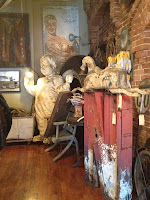 If you have ever watched American Pickers, they buy items and then they tell you what they might price it for in their store. I was determined to buy something picked at their store for Drew. I combed over every item in the store, and every item was over $200. Brass beds, motorcycles, vintage Levi's, black and white cowboy boots; all with a hefty price tag. I found a crock pitcher that I was sure was the right thing. Price $300. Then another with Kentucky Bourbon on it picked by Mike from Idaho. $1500. Wow! 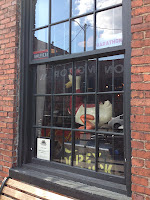 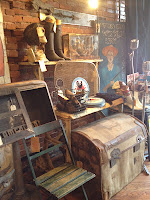 So instead I settled on two t-shirts. That is how they make their real money from the store. T-shirts, sweatshirts, license plates, IPhone covers, and glasses. As I got to the counter with my two t-shirts I recognized the blonde hair girl behind the counter. She has been on the show a few times, and was hired as the "manager" of the store by Danielle. I will have to admit I was a bit star-struck. I waited just about to the end of my sale, and said, "I've seen you on t.v." Hello, dork alert! She was nice and responded, "a few times." Way. to. go.


It was cool to go and see the things in the store; some of which I had seen on t.v., but sadly there was no big picking for me that day. How cool would it be to go through people's stuff to find treasures? By
the way - Drew was happy with his t-shirt. 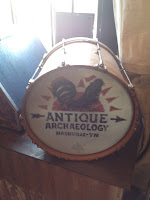 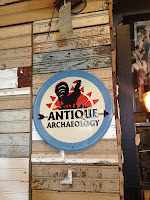