Take a walk down memory lane...

If you have ever been to DP Sales Management World Headquarters, you will know that my dad loves to show everyone the office and most importantly, the shrine of old Simmental magazines and photos that he has. He will quickly start pulling out the old Simmental Shields. And of course the old pictures of people that you might certainly know.

A little while back Drew had the idea to join together some of the best of the old and new cattle that DP has been apart of. So one evening after my dad had spoke to Walt Brownary's wife on the phone and relived many great memories of Walt, he pulled out some old Walt Brownary classics. Drew and I looked at each other. What a perfect opportunity! He was giving us what we needed! So, I told him that I was going to scan them so I could write a blog about them. Hello!

While he was gone on a week long trip to Canada, Missouri, and Kansas; mom, Drew, and I hung up the new Simmental shrine. Not only did we do some photos of past Champions, herd sires, and donor cows, we also framed his EKU Diploma, Kentucky FFA State Degree, and ASA membership certificate.

When he came home from his trip, we all sat - WAITING and WAITING for him to go downstairs. He had no interest. Finally, after quite some time. Mom asked him if he was going to go see her new television in the office. He went downstairs, into the laundry room (we followed behind), and walked into the office and didn't notice a thing. He finally looked to the side wall and saw our masterpiece. 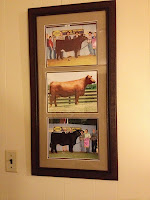 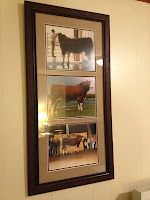 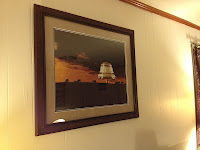 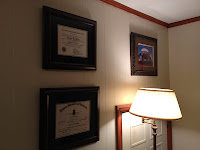 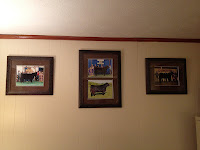 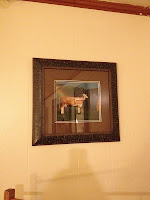 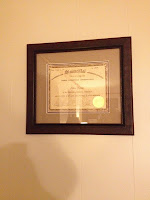 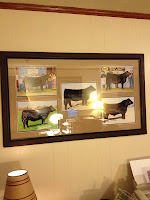 I think it is so exciting and such a wonderful group of memories. I'm especially proud of the 5 photo frame that has animals that were all bred by me. Three of them were past show champions and the two bulls are popular Simmental herdsires. There might be another one of those made some day. :)
Posted by Holli at 2:57 PM