Can I see your stick??

My dad has been in the Simmental business for over 30 years now. He's been the manager of some outstanding Simmental operations, then went on to begin his own business. His knowledge of the Simmental industry and cattle within our breed is unbelieveable. We often tell him he is the walking dictionary or phone directory of our breed because it seems everyone calls to ask him questions. I find every time he gets on the sale block on sale day that I become very proud. 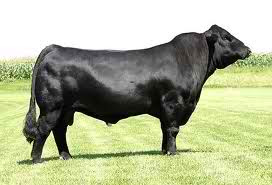 But perhaps, one of the coolest moments was when he, Chris Schick, and Jon Janssen were awarded bronzed statues of CNS Dream On at the National Western Stock Show by ABS. CNS Dream On is the most influential and most used bull in the Simmental industry in the last few years, and has sold a lot of semen. Semen distributor ABS "bronzes" bulls that have sold record amounts of semen. There are five or less bulls that have been bronzed, mainly Angus, and Dream On was the first Simmental. 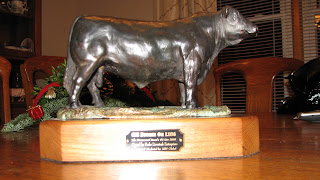 Dream On spent much of his life in stud, and sadly died last year. Due to the fact that he had such an impact on the breed, the owners decided to keep parts of him. Chris got his hide, Jon got his head (which is massive), and my dad got....(drum roll)... his penis and scrotum. Of course, due to his massive amount of semen sales, these were the most important parts.

Now you might wonder what you would do with these parts. You can utilize the penis of an animal to make a Pizzle Stick. There are dried and made into a cane. It is super cool and very interesting. And it arrived!!! 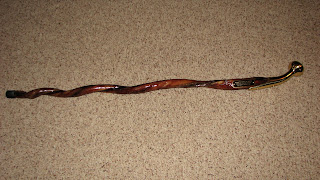 It has a small plate near the handle that has the bull's name, date of birth to date of death, and my dad's business on it. 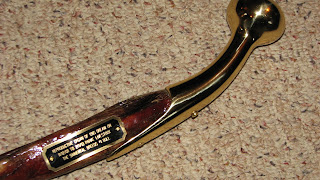 He hasn't received the scrotum yet, but I'm thinking that a candy or nut bowl would be useful for it. :)
Posted by Holli at 9:38 PM